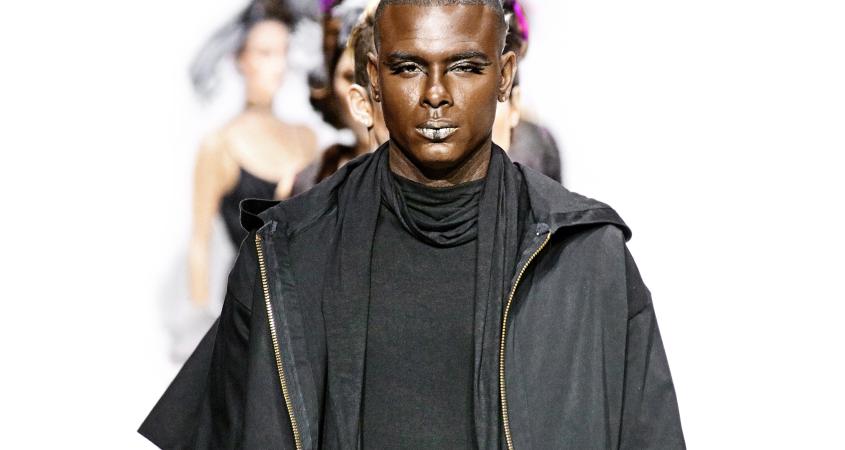 The temerity of Adrian Alicea is only surpassed by the precise execution of his vision. Adrian Alicea is the new romantic of romantic excesses. Creating a pirate-like fairy-tale of disguises, he walks a tightrope between ironic hedonistic inclination and highly serious social commentary. There is an insane carcinogenic, merciless narcissism. There is a deafening, endless shout of “gimme more!”–Earl Murray

Adrian Alicea is an award-winning fashion/costume designer and creative director based in New York City. Born in Puerto Rico, Adrian moved to NYC at the age of three. In his teen years, he would spend hours studying art; this deep exploration of the human spirit engendered an unrivaled love for expression through dance. At the age of 21, Rae Dawn Chong discovered Adrian at the iconic nightclub The Tunnel and invited him to go to Paris and walk for Thierry Mugler’s couture show. From there his career took off and with persistent effort continued working with the masters of Europe:Hermes, Giorgio Armani, Jean-Paul Gaultier, Gianfranco Ferre, Vivienne Westwood, and Patricia Fields and graced the stage with notable supermodels Naomi Campbell, Kate Moss, Christy Turlington, Debra Shaw, Veruschka von Lehndorff, Tyson Beckford, Iman, and Marpessa Hennink.

He’d eventually tour the world as a professional dancer alongside the legendary Willi Ninja and Grace Jones. This led to two electrifying performances in “Deep in Vogue” and “Waltz Darling” by the multi-talented Malcolm McClaren.

In the late nineties Adrian met Nico Urquiza and the House of Nico & Adrian was born. Their partnership eventually led to Linda Evangelista gracing the 2003 September issue cover of Italian Vogue with their iconic spiked wrestling helmet. Marie Claire, Flaunt, Numéro, Billboard, Vogue Russia, and other prestigious publications highlighted their high fashion editorials soon afterward. The lens of Steven Meisel and David LaChapelle immortalized their inimitable style and concepts. In due course, after a beautiful engagement, both Nico and Adrian decided to part ways amicably on artistic grounds.

After starting his own brand Adrian Alicea, Adrian’s creativity began to shift and take on new forms, culminating in unique and unorthodox ideas for style and fashion. He presented runway shows that were so scandalous in their overt sexiness many of the world’s top models and fashion photographers lined up for collaborations.

Adrian has since teamed up with many celebrities over the years, designing for stars such as Zoe Saldana, Lil Kim, Marilyn Manson, Nick Cannon, Chingy, Melissa Ford, The Mummy’s Patricia Velásquez, Anna Cleveland, Daddy Yankee, Naughty by Nature’s Treach, India Arie and Camila Alves. Most recently, aside from showing at New York Fashion Week, Adrian Alicea became the proud recipient of the 2016 Cinema Film Festival Award for the best new emerging designer in Los Angeles, California. Celebrating his growth as an artist and paying tribute to his Latino and Taino Indian roots, Adrian quietly states: “I love color. I love music. I love culture.”

This site uses Akismet to reduce spam. Learn how your comment data is processed.

The Boss Mann is a magazine for the man who desires to be all he can be, the issues are filled with information on grooming and health care, fashion style, random facts, including artwork, travel and interesting articles music and much more.

The Boss man hopes to encourage and inspire the younger generation of young men today by showing them how to become a better man.

With a positive presence, it allows one to see where men can change for the better in all areas of their life, and set the mark for excellence as a male figure for an upcoming generation.